How to join streams in Apache Flink 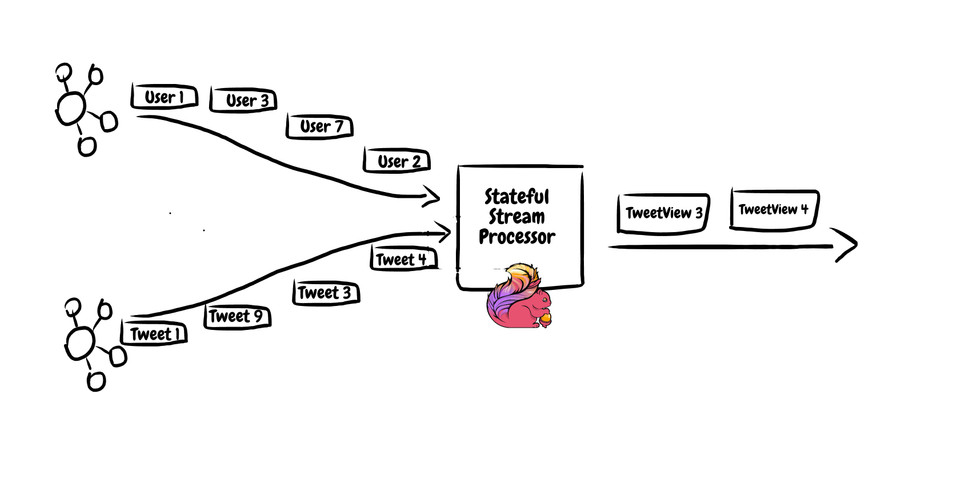 At DriveTribe, we use a fair bit of stream processing. All events flow through Kafka and we use Apache Flink for scoring, enrichment and denormalized view production in realtime at scale.

We often need to find talented developers to join our team. In order to test for stream processing knowledge, we came up with a simple stream join exercise. I often get asked to provide a solution for it, so I thought a blog post might be useful. The article assumes some basic understanding of Apache Kafka and related technologies.

The full code, along with some appropriate testing, can be found at https://github.com/ariskk/flink-stream-join.

Assume you have the following rudimentary data model. Assume that User and Tweet are keyed using their respective keys and stored in Kafka. Describe* how you would implement a join function to produce a DataStream[TweetView] from a DataStream[User] and a DataStream[Tweet]. Choose a stream abstraction you are comfortable with. Kafka's KStream or Spark's DStream could work equally well.

* No live coding is required. Only a high level analysis of the problem and potential solutions.

The description provides a few clues:

At the very basic level, we need a way to partition both streams using UserId and then funnel all events for a key into a single parallel instance of the transformation function. To do this in Flink:

Now to the interesting part. We need to implement a function that takes:

and produces a stream of TweetView.

At this stage, it might be tempting to assume that we only need to store the user and then just decorate the stream of tweets as they come. Unfortunately, that would be wrong. There are no guarantees as to which order the events will arrive. We might receive tweets before the user creation event. The user might decide to update their profile (triggering a fan-out). Events can be late and arrive out of causal order for a variety of reasons. It is our job to ensure commutativity between users and tweets. Kafka can only make sure we get user and tweet updates (per key) in the correct order.

To process both streams properly we need to store the latest user profile and all the tweets we have received.

Note: coMapWithState contains some Flink specific state config that has been omitted here. The full implementation can be found here.

What this function does is quite simple:

How well this works in practice depends on the cardinality of the datasets. Replace tweets with sensor readings and users with a faster stream and this approach might be impossible. In DriveTribe's use case where users update their profiles every few weeks and users have at most a few hundred posts this works quite well.

If you have feedback please reach out on Twitter.

Thanks for stopping by!