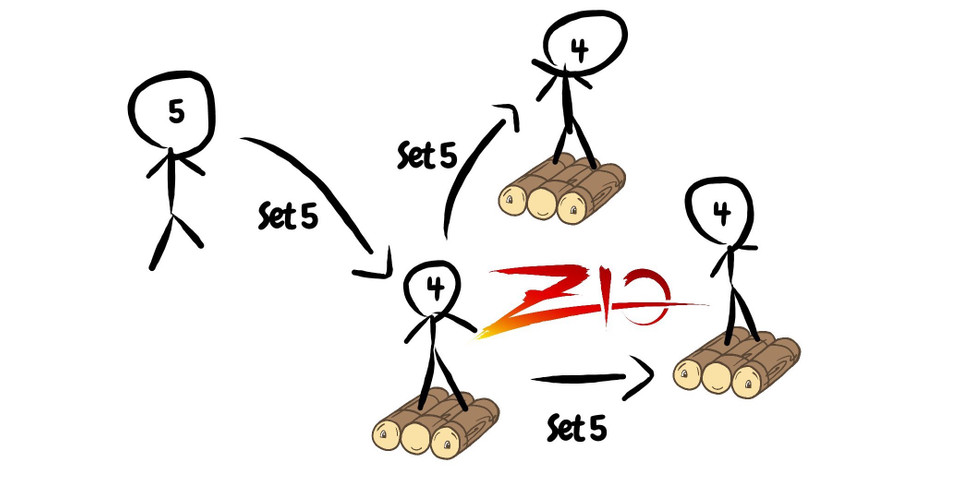 This article presents an implementation of the Raft consensus protocol in Scala using ZIO. More specifically, it covers the architecture of the project, leader election, and log replication. It assumes some prior distributed systems knowledge, eg what RPC is. Full Code: https://github.com/ariskk/zio-raft

Raft is a consensus protocol. It is the kind of algorithm systems use when multiple servers need to agree on a single value. It is a coordination primitive often used in databases and other distributed systems.

A Raft cluster's lifecycle can be split into two distinct phases:

The whole protocol is based on two simple RPC calls; or 4 different types of messages:

The above process supports linearizable semantics. From Jepsen:

Linearizability is one of the strongest single-object consistency models, and implies that every operation appears to take place atomically, in some order, consistent with the real-time ordering of those operations: e.g., if operation A completes before operation B begins, then B should logically take effect after A.

This is a strong consistency model. Linearizable systems cannot be totally available in the face of network partitions. Raft is thus suitable for systems where consistency is critical; those usually provide coordination services to other systems. Some well known systems using it are etcd and Consul.

Digging more into the paper is definitely worth it.

The implementation is using Scala and the fantastic concurrent programming library ZIO. The repo is hosted at https://github.com/ariskk/zio-raft. If you have feedback, please do reach out on Twitter; I am looking for inspiration regarding the next steps.

The architecture of the Raft Server implementation is summarised in the following diagram: 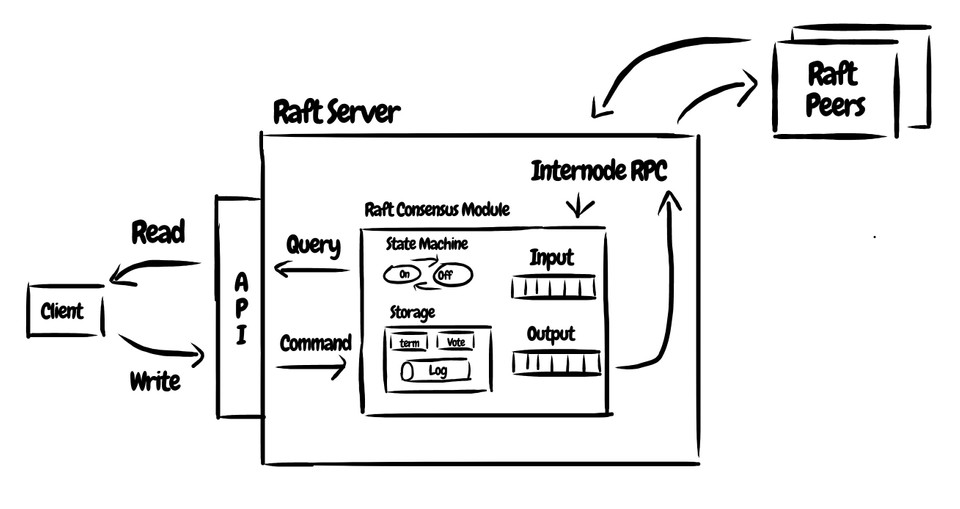 It contains the following components:

RaftServer.scala brings all those together using zio-nio to implement a very simple network layer.

Let's now see how those can be used for the two fundamental Raft functions: Leader Election and Log Replication.

A Raft node can be in three different states:

Those three states and their transitions are summarised in the following graph: 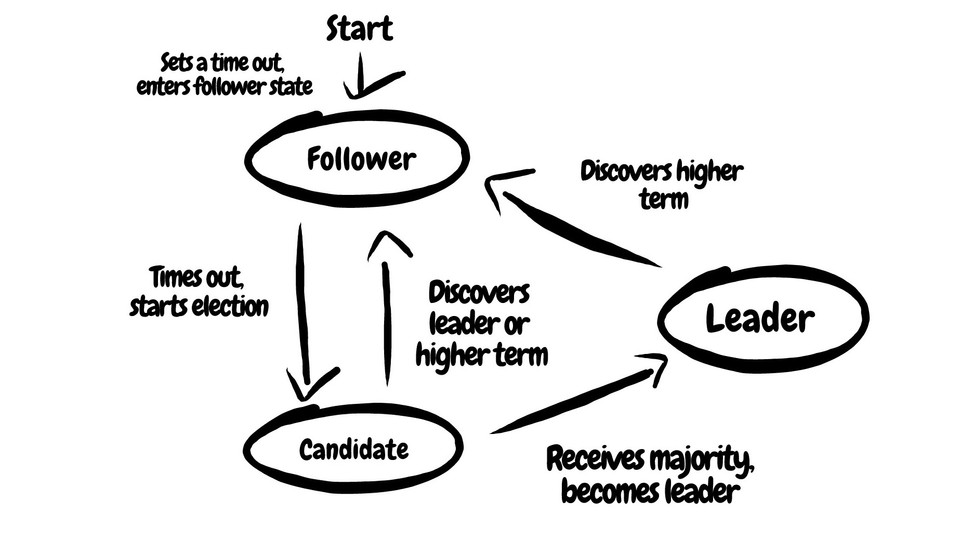 A Raft node starts in Follower state. If it doesn't hear from a leader for a period of time, it does the following:

This process could lead to a deadlock if this period of time was constant. To resolve this, Raft employs a randomised timer:

** This is config and depends on network latencies and other factors. If Raft is used for cross datacenter replication this likely needs to be higher.

This follower logic can be encoded in Scala as following:

If no AppendEntries is received and there is other known candidate, the node runs for leader.

Once the vote requests are sent, the Candidate nodes collect vote responses. Since more than one may be running at the same time, vote collection should exit if another node wins the majority or another candidate is running at a later term.

If the node loses the election, it becomes a Follower and runs the processInboundEntries loop outlined above. If it gets elected, it starts sending heartbeats. Those are simply AppendEntries messages where the list of entries contains all uncommitted entries (more on this later). If all entries have been committed, then this list is empty.

LeaderHeartbeat is set at 50 milliseconds; frequent enough so that the minimum election timeout of 150 millis is never reached even in periods with no client commands. processAppendEntriesResponses contains an additional check where the leader steps down if it receives an AppendEntriesResponse from a later term.

To sum up the leader election:

At this stage, the cluster has elected a leader and is ready to accept commands from clients. Those commands need to be replicated to a majority. Let's see how this works.

Clients send commands that essentially represent StateMachine transitions. Raft stores those commands in a Log and replicates those log entries to all peers. Each log entry has an Index and a Term.

If the StateMachine is a Key-Value store, then a command could look like this:

The Command model depends on the application.

Those traits model commands to a generic state machine which looks at the very basic level like this:

When the Leader receives a WriteCommand from a client, it executes the followings steps:

from is always the leader and to one of the followers. The current leader term is included. The leader also includes prevLogIndex, which is the index of the entry immediately preceding the new entries. Equivalently, prevLogTerm is the term of the previous entry.

Raft AppendEntries have to be idempotent for the protocol to work correctly. By including the Index after which the new entries should be appended, Raft guarantees that followers have enough information to detect and discard duplicated AppendEntries messages. Finally, leaderCommitIndex is the index of the highest log entry known to be committed (replicated to a majority of peers).

The receiving Follower first checks the Term of the incoming message. If the AppendEntries term is smaller than the current term in the follower the entries will be rejected. This rejection is particularly important as this is how the leader knows a more recent term exists and thus it needs to step down.

If the term is larger or equal, then the follower will perform the following check:

Raft guarantees that if two logs have the same previousTerm in previousIndex, then the logs are identical in all preceding entries. This is known as the Log Matching Property. For a detailed explanation as to why this holds, please refer to section 5.3 of the Raft paper.

This practically checks if the follower log is identical to the leader log minus the new entries. If it is, it is safe to append. If it isn't though, that means that at least the entry at previousIndex is an illegal entry from a previous leader. There is no use for that data as that entry hasn't been committed and it never will. In this case, the follower purges all entries starting at previousIndex and responds to the leader with a failure.

At this stage, the leader knows that the follower's log is out of sync. To be able to fix situations like this, the leader keeps an auxiliary data structure where it stores the last known replicated Index for each peer. This is called the matchIndex. If appending after previousIndex fails due to previousTerm being different, then the leader decreases the index by one and tries again. This process is repeated until the index where the two logs are identical is found. Then the leader replicates all entries starting from this index and until the last. When this process is completed, the shouldAppend method outlined above will return true and the follower can append to its log.

The full implementation can be found at https://github.com/ariskk/zio-raft. The implementation is not complete. Notable parts of Raft missing include snapshots, log compaction, and cluster membership changes.

The tests make an effort to introduce non-Byzantine failures and thus test protocol robustness under semi-realistic network conditions. That said, proper integration tests using Jepsen are needed before this can be used in the real world.

If you have any feedback or ideas on how to move this forward, please reach out.

Thanks for stopping by!